Stir in the curry, brown sugar, ginger, garlic, and chili and cook until fragrant, about 30 seconds. Pour in 1/4 cup of broth and scrape up any toasty bits from the bottom of the pan. Transfer this onion-potato mixture into the bowl of a 6-quart or larger slow cooker. (Halve this recipe for a smaller slow cooker.)

To the slow-cooker, add the rest of the broth, chickpeas, bell pepper, cauliflower, tomatoes with their juices, the pepper, and the final teaspoon of salt. Stir to combine. The liquid should come about half way up the sides of the bowl; add more broth as necessary. Cover and cook for 4 hours on HIGH.

Stir in the spinach and coconut milk. Cover with lid for a few more minutes to allow the spinach to wilt. Taste and correct the salt and other seasonings as needed.

Serve on its own or over cous cous, Israeli cous cous, or orzo pasta. 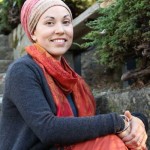 Siri Shakti was born and raised in Pleasanton California. She now lives in Southern California, with her husband and three young children. She is an author, poet, artist, teacher and life coach.

It is her purpose in life to uplift and encourage women to their highest potential. Truly reclaiming their inner strength so that they may be bountiful, beautiful, and blissful.

Siri Shakti is a committed Yogi, devoting her life to Mastery and the Kundalini Yoga Life style. She is a Homeschooling and attachment parenting advocate.